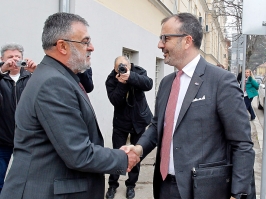 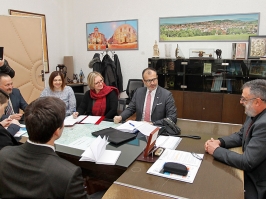 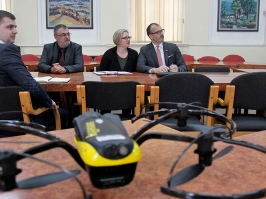 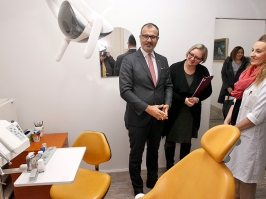 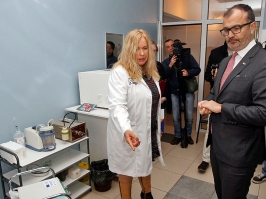 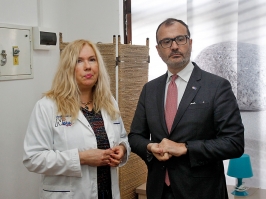 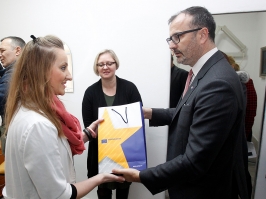 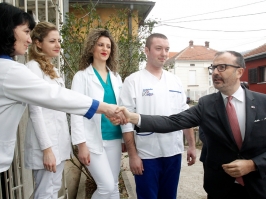 Aleksinac has always been a reliable partner when it comes to development projects, said Head of the Delegation of the European Union (EU) to Serbia Ambassador Sem Fabrizi during a meeting with Nenad Stankovic the Mayor of Aleksinac, Ambassador’s first stop during his maiden visit to the Nišava District. Ambassador then met with the Mayor of Niš Darko Bulatović, underling that it was his pleasure to pay his first visit to Niš shortly after the publishing of the European Commission’s Enlargement Strategy which laid out a specific time frame for Serbia’s EU accession.

Ambassador Fabrizi has said that through European PROGRES development programme alone, the EU has invested over 400,000 Euros in Aleksinac to support the implementation of 22 projects aimed primarily at strengthening the capacity of the local self-government and improving municipal services.

Together with the Aleksinac Mayor, Nenad Stankovic, Ambassador Fabrizi attended the presentation of one of those projects – Geographic Information System (GIS). Initially, the EU supported the GIS project through programmes Exchange 2 and EU Exchange 4, only to extend additional support of 150,000 Euros for its upgrade through European PROGRES. As a result, the municipalities of Aleksinac and Merošina have digitised their municipal infrastructure, urban plan, natural resource, cadastral parcel and industrial zone-related databases, as well any other data concerning improved development planning, resource management and disclosing of information to the public and potential investors.  Within the same project, the municipalities have obtained a drone with pertaining equipment and software and have thus increased the quality of collected data and efficiency of their processing.

“Serbia is getting closer to a day when will become a part of the European family, but what matters the most is helping Serbian citizens to improve their lives, the way we helped these two newly opened medical practices that show potential for further development,” Ambassador said during his visit to a young female physician and a dentist who started their own practices with support from the EU and the Government of Switzerland extended through European PROGRES. Head of the EU Delegation paid a visit to dentist Maja Ostojić who, thanks to a donation worth 8,300 Euros, opened her own dental practice, and Biljana Đokić who received assistance to purchase several pieces of modern equipment – fetal and Holter monitors and a radio wave knife. Through European PROGRES, the donors have granted 356,400 Euros to help 43 women start their own business, thereby contributing to promoting gender equality through economic empowerment of women.

As Ambassador Fabrizi announced in Aleksinac, a new project EU PRO should start in March, and he invited the Mayor and the municipal administration to seize opportunities offered and prepare new projects that will bring benefits to local population, increase economic growth and boost job creation.

During his first official visit to Niš, Head of the EU Delegation to Serbia, Sem Fabrizi was acquainted with the EU projects successfully implemented in Niš. Among the topics of the visit was the European Year of Cultural Heritage and cultural and historic importance of the city of Niš.

“Local self-governments will have an important role in reaching our joint, great goal of the EU membership, since 75 percent of legislation should be prepared cities and municipalities,” Ambassador Fabrizi said.

Representatives of the local Development and Project Office made a presentation of successful projects. “Thanks to the EU grants, we have constructed a modern clinical centre and will reconstruct the Niš-Dimitrovgrad railway line. Another project worth mentioning is the construction of wastewater treatment facility as well as the 1,237,000 Euros-worth of grants invested in building apartments for the most vulnerable members of the Roma community,” said Darko Bulatović the Mayor of Niš.

Following the meeting with the Niš Mayor, Ambassador Fabrizi and his hosts took a tour through downtown Niš and learned more about the rich history of the city. After the seeing the archaeological exhibition of the National Museum in Niš, Fabrizi visited the EU Info Point and Aleksandar Markovic’s exhibition Dehumanization dedicated to the victims of the Holocaust. EU Info Point public space manager Bojana Petrović, while greeting numerous attendees, briefly presented the activities of the EU Info Point. “Since May 2016, we have organised nearly 600 events – on and outside the premises – as part of important music festivals, public events in the streets and  the main square, for our fellow citizens, but also for the citizens of Prokuplje, Paraćin, Medveđa, Zaječar, Negotin, Aleksinac, Kragujevac, etc.,” Bojana Petrović said.

“The fact that we have an office here at the EU Info Point, makes me feel at home. Also, during our visit to the National Museum, the curator told me the entire history of this region in 15 minutes,” said Head of the EU Delegation to Serbia and reminded that the EU had designated 2018 as the Year of Cultural Heritage. Aleksandar Marković, the author of the exhibition Dehumanization, inaugurated on the occasion of International Holocaust Remembrance Day, also addressed the audience. “My intention was to emphasise facial expressions and body language, to let people identify with what the Holocaust victims suffered through,” said Marković for whom Dehumanization marks his first solo exhibition.

Together with city officials and the Dean of the Faculty of Electronic Engineering Dragan Janković, Fabrizi toured the Start Up Centre of the Faculty – the first segment of the science and technological park for which the European Investment Bank has allocated 15.2 million Euros.  The Students brought the Ambassador closer to technological innovation they had come up with, such as the smart phone mobile application “52 weekends in Serbia”. Head of the EU Delegation also had a chance to pay a virtual visit to several monasteries in the vicinity of Nis thanks to a 3D presentation.

“Today, at this Faculty, I did not see the future, I saw the present – numerous young researchers developing their ideas. At our disposal we have many instruments to support science and innovation, such as Erasmus+ and Horizon 2020,” Fabrizi said. The Dean of the Faculty said that “by investing in the science and technological park, youth in Niš and the region will reach the level of their counterparts in universities in the EU, and even exceed them.”

Ambassador ended his visit by taking part in a debate titled “Ask me anything about the EU,” organised by the European Movement in Serbia within the project Europe for Me. Ambassador Fabrizi talked to the citizens for more than an hour, answering their questions concerning decentralisation, human rights, opportunities for farmers, the negotiating process, and bringing them closer to the Western Balkans Enlargement Strategy.