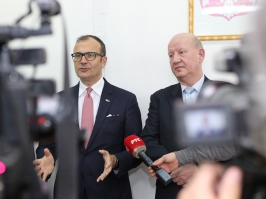 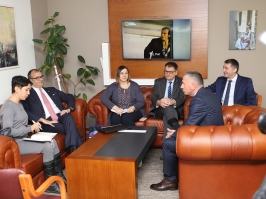 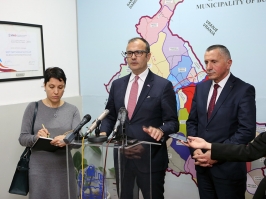 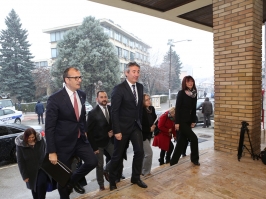 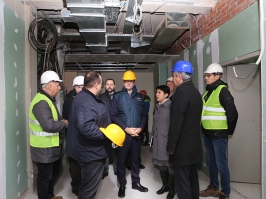 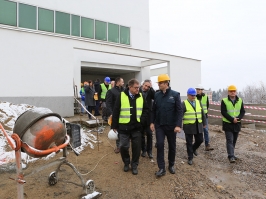 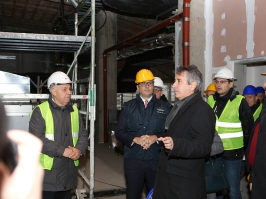 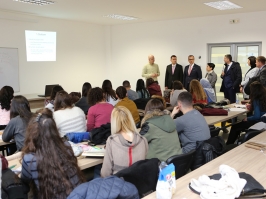 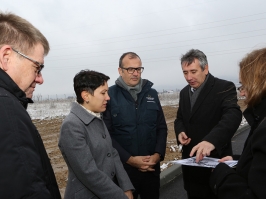 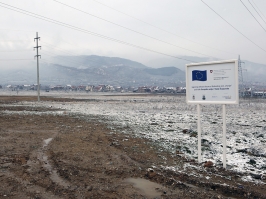 The Head of the Delegation of the European Union (EU) D began his first visit to the south of Serbia in Vranje, by visiting EU-funded projects aimed at improving the lives of the population.

Together with Mayor of Vranje Slobodan Milenković, Ambassador Fabrizi visited the works for the completion of the surgical block at the Vranje General Hospital, for which the EU has allocated 2.8 million Euros, and said on that occasion that the EU was proud of the fact that its name was associated with this important project, and that the population of this part of the country deserved to receive high-quality health services.

„The European Union taxpayers allocate 200 million Euros a year for Serbia in order to help it attain European standards, which will benefit all Serbian citizens“, said Ambassador Fabrizi while expressing his satisfaction at the fact that part of these funds is invested in Vranje.

Mayor Slobodan Milenković recalled that the construction of this block had started in 2002, but was interrupted in 2012 due to financial constraints.

„Owing to the funds secured by the European Union and the Government of Serbia, the works were resumed in June this year, and we hope that in 12 to 14 months, as stipulated by the contract, the city of Vranje and the entire Pčinja District will finally have a surgical block which they deserve and which is a necessity in the 21st century," said mayor Milenković and thanked the EU for the funds it has earmarked for the completion of this capital project.

In Vranje, the Ambassador and the Mayor also visited the Free Zone "Bunuševac", whose infrastructural development and the preparation of technical and planning documents were supported by the EU with almost 700,000 Euros, on which occasion the Head of the EU Delegation said that Vranje has an extremely rich industrial tradition, and that it is only natural for investments to come to this particular part of Serbia.

„I am pleased that some companies from the EU have already invested here around 28 million Euros, and we encourage others to also come and invest in this area," said Ambassador Fabrizi.

As the Mayor of Vranje explained, the EU has financed the building of a road in the Industrial Zone together with supporting installations, another road with two roundabouts is under construction, as is the ring road that will connect the Free Zone with Corridor 10, thus contributing to the relocation of cargo traffic from the downtown area.

"The EU has been a long-time partner of the City of Vranje, and we have presented to the Mayor a new programme that will be financed with EU funds, under the name of EU PRO, which will be focused mainly on economic development," announced EU Ambassador Sem Fabrizi.

As the Head of the EU Delegation added, Serbia is in the process of negotiations for accession to the EU, and strong commitment to this goal can be identified both at the central and at the local levels.

The Mayor of Vranje, Slobodan Milenković, pointed out that through the development programme European PROGRES alone, the EU invested, in partnership with the Government of Switzerland, more than 3.5 million Euros in projects in Vranje over the last three years, and that the City was ready to apply for projects in the new programme with its own well-developed and professional Office for Local Economic Development.

Head of the EU Delegation Sem Fabrizi continued his visit to South Serbia by visiting Bujanovac where he had a meeting with the President of the Coordination Body of the Government of the Republic of Serbia for the Municipalities of Preševo, Bujanovac and Medveđa, Zoran Stanković, who indicated that the international community had invested around 35 million Euros into this region over the previous period, together with 60 million Euros allocated through the Coordination Body. Stanković expressed hopes that cooperation with the EU in the forthcoming period would be focused in particular on improving economic conditions. The Head of the EU Delegation, Sem Fabrizi, expressed his satisfaction with the projects implemented in the field of education, health care and infrastructure, and said that the EU accession was the future of Serbia and that the EU would double the efforts to extend help on that path.

In his first official meeting with the President of the Municipality of Bujanovac, Shaip Kamberi, Ambassador Fabrizi pointed out that the EU would continue to support the development of Bujanovac, while the President of the Municipality underlined that only in cooperation with the EU Delegation, the entire international community and national institutions the problems of the population in this part of the country could be resolved.

In Bujanovac, the Head of the EU Delegation visited the Bujanovac Department of the Subotica Faculty of Economics, whose building was constructed in 2015 with the support of the EU, which allocated over 800,000 Euros through the European PROGRES Programme, while the Government of the Republic of Serbia co-funded it with 208,000 Euros through the municipality of Bujanovac and the Coordination Body for Preševo, Bujanovac and Medveđa. As assessed by the Ambassador, the Faculty is an example of how the EU can contribute to better education, social integration and the economic future of this part of the country and he called on all the stakeholders to invest efforts to make this project a long-term and sustainable one.

The EU Ambassador will conclude his visit to South Serbia by taking part in the Stakeholders' Committee for the project related to the Department of the Subotica Faculty of Economics in Bujanovac, which will also be attended by OSCE High Commissioner on National Minorities Lamberto Zannier, Head of the OSCE Mission to Serbia Andrea Orizio, the President of the Coordination Body for the municipalities of Preševo, Bujanovac and Medveđa and the Bujanovac Mayor.