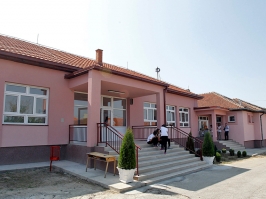 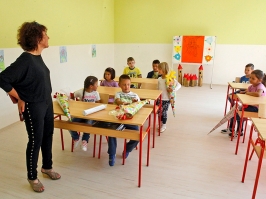 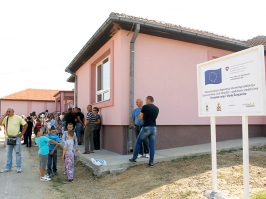 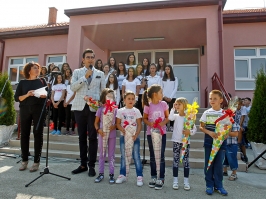 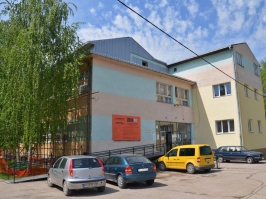 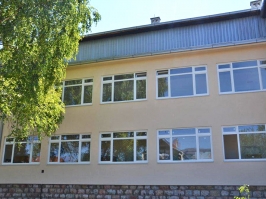 Thanks to funds allocated by the European Union and the Swiss Government, the pupils and teachers of five schools in the south of the country – “Trajko Stamenković“ in Leskovac, “Stojan Novaković“ in Blace, “Miloje Zakić“ in Kuršumlija, the “Vuk Karadžić“ primary school in the Surdulica village of Suvojnica, and “Ljupče Španac“ in Bela Palanka – are starting the new school-year in much better learning and teaching conditions. The donors invested 412,000 Euros in the restoration and energy rehabilitation of these educational facilities through the European PROGRES development programme.

The 846 pupils of the Leskovac Primary School “Trajko Stamenković“ will no longer be cold in winter thanks to the replacement of the old doors and windows and the thermal insulation of the school roof and façade, which the donors supported with 95,000 Euros. Energy efficiency upgrades included the installation of LED panels, which both save energy and provide better lighting and learning and teaching conditions in the classrooms. Major savings in the city budget will also be made thanks to lower maintenance costs.

“For the first time in more than a decade, our pupils will not have to wear their jackets in class during the winter months because the learning and teaching conditions will be much better in the renovated facility,” says Principal Sunčica Ilić.

Around 600 pupils of the Primary School “Miloje Zakić“ in Kuršumlija today began the new school year in renovated facilities as well. The energy efficiency upgrade of this Kuršumlija school, supported with 100,000 Euros allocated by the European Union and Swiss Government and 47,000 Euros set aside by the Kuršumlija Municipality, involved the replacement of the old wooden windows in the pupils’ block, thermal insulation and insulation of the roof, replacement of the roof tiles and installation of the façade.

“The school celebrated its 36th anniversary this year and this is the first investment in it since it opened that has provided the pupils and staff with proper learning and teaching conditions. As far as energy efficiency is concerned, the Municipality is firmly committed to proper energy management and control of energy consumption and we will put particular focus on building institutional capacities and applying efficient energy consumption measures,” said Kuršumlija Mayor Radoljub Vidić.

Pursuant to good governance principles, the Kuršumlija Municipal Council adopted a Draft Decision on the Environmental Protection and Energy Efficiency Fund and an Energy Efficiency Programme and its Action Plan for the 2018-2020 period.  The Plan specifies which activities the local self-government will undertake to improve the energy efficiency of public facilities. An energy management system will be put in place by the end of the year.

The EU and Swiss Government invested 56,000 Euros in the renovation of the Primary School “Stojan Novaković” in Blace, which involved the replacement of the old flooring. The four-year school “Vuk Karadžić“ and the Preschool Institution “Naša radost“ in the Surdulica village of Suvojnica were also renovated to ensure equal access to education in rural areas. The works, for which the donors earmarked 100,000 Euros, included the replacement of a part of the roof, doors and windows, flooring and tiles, as well as the toilets, electrical installations and façades.

Pupils of the Primary School “Ljupče Španac“ in Bela Palanka also entered new classrooms, after the entire roof of the building was replaced and the basement renovated in accordance with the main reconstruction design, the development of which was also supported by European PROGRES donors. The funds for the energy efficiency upgrade of the building were approved by the Serbian Government Public Investment Management Office.

European PROGRES Programme Manager Graeme Tyndall underlined that the EU and the Swiss Government had invested nearly two million Euro in improving the schooling conditions for primary and secondary school and university students in the 34 less developed local self-governments in South-West and South-East Serbia.

“The European Union and the Swiss Government have been supporting the improvement of education both in urban and rural settings by upgrading the social infrastructure, thus helping create a society providing everyone with equal opportunities,” said Tyndall, adding that education was crucial to societal development, because it directly contributed to poverty reduction, economic growth, gender equality and equality in general.

Works are also under way in the Tutin Municipality, the village of Zapadni Mojstir, which will have a brand new primary school for the 50 pupils living in it and the nearby villages. The living and learning conditions of “Milentije Popović“ secondary school students in Crna Trava will also be improved soon thanks to the renovation of the school and dormitory.